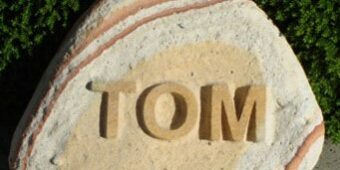 We made this cobble in remembrance of a much loved cat called Tom.  His owners said that they were “so pleased with Tom’s memorial,  that it looks lovely under the apple tree were he is buried and it’s a nice reminder that he is there. The stone is almost the same colours as his fur. Having a memorial stone for Tom has made his loss a little easier. Thank You”. 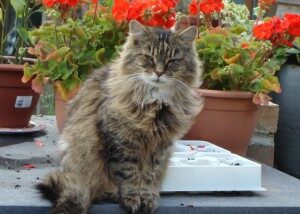 We made a similar one for our rescue cat Jem who originally lived ferally on an estate in Milton Keynes – how she survived I really don’t know; she was a terrible hunter! She lived with us from around the age of 18 months and died of old age (on my lap) last September. Sleep tight xx